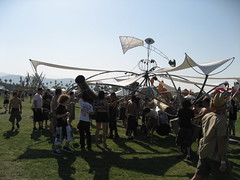 So Hermosa Beach’s Silvio’s Brazilian BBQ takes on the wired masses at Coachella – yet again, for the fifth year. Essentially, we can use Barbecue Meat Skewers as a glimpse into the little-known world of food vending. And that – at the biggest festival in the country. Chef Dion and David, Silvio’s Brazilian BBQ’s crew members  grill through a batch of Silvio’s signature BBQ ribs. Using Brazilian Meat Skewers.

So, my ears quickly adjust to the sound of Portuguese, as nearly half the crew are recent transplants from Brazil. Since Doug and Silvio avoid hiring through temp agencies, and Craigslist as is common among other festival vendors. They handpick their people by reference, particularly in the tight-knit Brazilian community in Southern California.[…]