God that was a brutal game! Ok, maybe I don’t know much about soccer, but I do know a bit about MMA. But, that looked more like the latter to me. It’s like they set out to redefine what a “faul” is! And, well… come on! Truth be told, Mexico started it, thinking it could intimidate Brazil into losing! Well, they bit more than they could chew. Finally, with that tie now behind us, let us bite into the contest with the Brazil x Mexico menu:

A great part of the northeastern cuisine in Brazil is carne de sol. Which is meat that’s been salted and left to cure in the sun. It is really amazing and mostly eaten in tapiocas. Similar to tacos, but they are made of manioc flour. 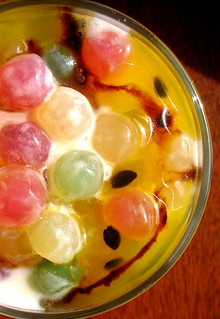 The day before, remove the fat from the meat and cut into large cubes. Soak in plenty of water, changing it at least twice. Then drain.

Next, in a medium saucepan, put in the meat, cover with water, and boil for ten minutes. Then drain and add the milk. Cook for 30 minutes or until soft. Drain, let cool, and shred.

In a saucepan, saute the onion in half the butter until soft and add the meat. Remove from heat, add the chives, salt, and stir.

Place the remaining butter in a medium skillet and cook until melted. Finally, add the mozzarella and let it melt.

Put a World Cup tapioca piece on each plate and fill with two tablespoons of cheese and lots of carne de solo. Fold and serve. Enjoy!

Now, I don’t know how the narration of the game went in English. But in Portuguese, the guy kept saying that the Mexicans were heating up the game (with their karate attacks and all. Yeah, still pissed about that 😀 ). Well, and they should! Their cuisine is very hot. Maybe to go with their disposition. So here goes a great recipe for

So here goes a great recipe for mexican churrasco (careful it is very spicy!)

Salt and pepper to taste

First, place the topside in a bowl and season with garlic, salt and pepper.

Then let sit for 10 minutes.

Next, assemble skewers by placing 1 piece of meat, 1 tuscan sausage and 1 sausage, to fill the bamboo skewer.

Repeat until you finish the ingredients.

Grill on the barbecue for 10 minutes or until golden brown.

Then turn occasionally to prevent burning.

Challenge you taste buds with these two delicious meals, then please tell us which you think wins! At least this game is a win-win.