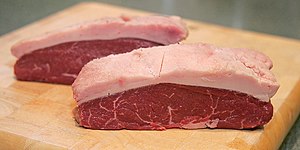 Enjoying Both Picanha and the Churrascaria.

While sitting around the dinner table enjoying Brazilian bbq at a famous well known American Churrascaria chain, the waiter will come over proudly displaying what looks like 3 small beef roasts and proclaiming “House special tonight, picanha!!” to which you should immediately respond “yes, rare”

Why is it the house special, and why is it every single night after night? Well, there are a number of reasons; it’s a special confluence of two things, economy and deliciousness. What few people know about Brazilian bbq is that it focuses on the sirloin part of the cow to source it’s best cuts of meat.

The sirloin is, in my opinion, a rather underappreciated part of the cow; their cuts are large, expansive and tasty. Since they are under-appreciated though, this makes the cuts themselves rather cheap. During my college days, a local store sold massive sirloin steaks for only $3 a pound. Being college kids, we laser focused our attention on making great steak out of it. With some creative marinating, we came up with a magical marinade and rare grilling methodology that we believe may have been the best steak in the world, and many others who have sampled it have concurred.

The sirloin, according to Wikipedia, is the cut in the rear hind quarters of the cow. In fact, the name sirloin comes from the French Sur Loin, meaning under the loin. They often refer the loin to as the filet, and the most prized part of the cow. The loin is the back muscle that runs next to the spine. Below that is the sirloin, which is the back muscle positioned ahead of the rump. Since it comes from the hindquarters of the cow, it is technically not kosher if one takes a strict approach as well. 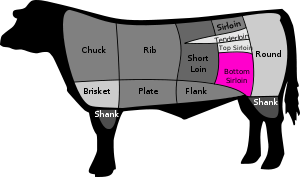 In most American butcher shops and supermarkets, the Picanha sirloin does not garner a position of prestige.  You can often find them on the bottom shelves of the refrigerator case, in large family value packs. But do not mistake them for something else. In the red meat realm, it’s a diamond in the rough.  The sirloins divide into three portions, the top sirloin, bottom sirloin and the tip, or cap. You will see Brazilian butchers selling the entire sirloin as a single massive prime cut, or divided into all three. All are great. They typically skewer the top and bottom sirloin with salt and garlic, and serve at the table. But the cap is a piece of pride for gauchos.

The cap, or tip, as they call it in American lexicon, – you can find them at many butcher shops hiding out. They call them a ‘tri-tip roast” or sometimes even a “three corner roast”. In Brazilian lexicon, they call it a Picanha and has just a bit of fat on its top. This helps add flavor during the grilling and roasting process. The reason they call it a tri-tip or three corner is that the cut itself has three corners. It is triangular in shape when viewed from the top. It’s the end of the sirloin muscle, and joins the spine, so isn’t perfectly square.

The typical way to prepare Picanha yields a delicious and affordable treat.  The chef slices it against the grain in long strips and then rolls them up.  Use the tension created by the fat cap as springiness to hold them on the skewer. Then simply salt and grill them, roast to light perfection, and slice off.  Then they return the meat to the grill in rounds. Until they are nothing but a small chunk of meat clinging helplessly to the skewer.

What this yields is a simple, cheap and tasty treat, and why Brazilian steak houses are highly in the mood to push it on their customers.  They lose no money making you happy, and the cut is delicious.

When I first tried picanha and the Churrascaria brought it to my plate, the delicious meaty, salty flavor stayed in my head for a few days afterwards, lingering with fond memories. This is why people keep coming back and back to Brazilian bbq, and now you know the story.

For more information you can read the article Picanha Brazilian Style by Suzie Castello.